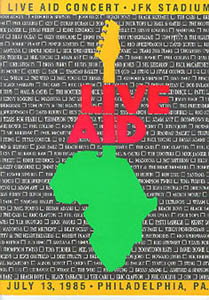 This is a follow up to my recent post about Live Aid, the enormous two-city concert held in 1985 as a culmination to a number of celebrity efforts at drawing attention to a devastating famine in Africa.

I was 15 at the time. Being the music and pop culture geek that I was, even at that age, I was immediately drawn to the event. It was, to me, a historical event in music (and in rock music in particular), on par with Woodstock, and other such monumental concerts. I still feel that way about it. 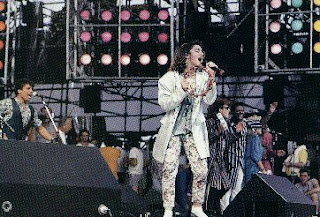 I followed the coverage of it from the start of the day. At first, it was mostly via radio. One of the radio stations I frequently listened to, an album rock station, had all day coverage, and I listened to it as if it were the greatest thing that ever happened. At one point in the day, my family even left for an outing, and I came along, with my Walkman radio in hand, still listening to the event Joan Baez (referring to our generation) called "your Woodstock." 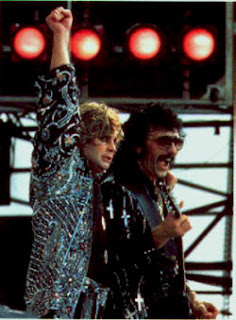 There were several interesting moments, including reunions from various major bands, including Led Zeppelin (with Phil Collins substituting for deceased drummer John Bonham); The Who; Crosby, Stills Nash & Young; and Black Sabbath.


There was even talk and rumors about a reunion of the three remaining Beatles (as John Lennon had sadly been taken from us by that time). The commentators on the radio who were covering the concerts mentioned it.  Alas, it was not to be.

At the end of the day, at least where I lived, television picked up coverage. I remember vividly this performance by Tina Turner and Mick Jagger.

The first song they are sang was "State of Shock," a song originally sung, in one of the most unusual duets of the '80s, by Michael Jackson and Mick Jagger. The song is off of the Jackson's album, Victory. I've got to do a post about that unique duet sometime!
Posted by Lazlo at 1:41 PM

Email ThisBlogThis!Share to TwitterShare to FacebookShare to Pinterest
Labels: '80s Music, '80s television, Eighties, Growing up in the 80s