This song is so '80s, and it shows all that is so wonderful about that decade. "The Safety Dance" was a song by '80s Canadian group Men Without Hats, becoming a major hit in 1983.  The song, containing the typical '80s quirkiness I love so much, also expressed the equally '80s trait of individualism. According to Wikipedia, it was a protest against bouncers stopping the dancing of more individualistic New Wave styles of dance, at a time when disco was dying. "New wave dancing . . . was different from disco dancing because it was done individually instead of with partners . . . Thus, the song is a protest and a call for freedom of expression."

Heres their follow up son, "Pop Goes The World." Its now being used in a laundry product commercial. Fun video and song!! 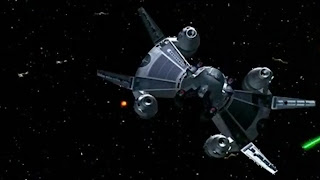 The '80s were an era full of wonderful sci-fi movies. One great little movie that has developed a solid cult following is The Last Starfighter, a 1984 movie which exemplified the '80s in a number of ways. It was, along with Tron (1982), one of the first movies to feature computer animation. It was one of many space-related fantasy movies out at the time, and it featured the '80s fascination with video games.

The film's protagonist, Alex Rogan is a typical '80s teen with dreams and ambitions who lives in a trailer park with his mother and younger brother. He longs to leave for greener pastures, but in the meantime, he bides his time while engaging in that very '80s passion: video games. In particular, he becomes adept at a space oriented Starfighter video game located at the trailer park, where he gets very good at beating the bad guys in an epic space battle. 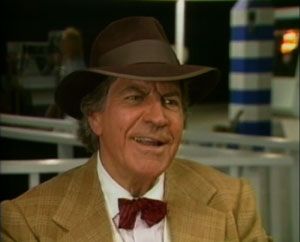 One day, he is approached by Centauri, who claims to be the inventor of the Starfighter video game. It turn out Centauri is actually a disguised alien who is scouting for starfighters to save the universe from the clutches of an evil space bad guys the Ko-Dan Empire.  The part of Centauri was played by famed actor Robert Preston, most well known for playing traveling salesman Harold Hill in The Music Man (1962). 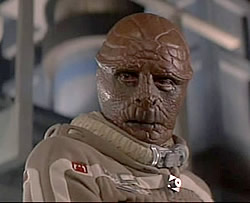 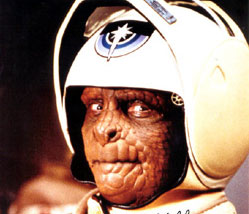 Alex is taken to the faraway planet Rylos, reluctantly recruited into the Rylan Star League, and introduced to Grig, a friendly repitilian alien who is to be Alex's navigator. 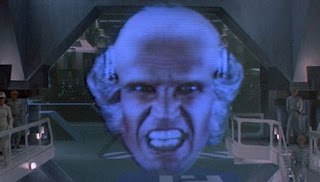 The Ko-Dan Empire is led by the evil Emperor Xur, who leads a sneak attack on Rylos, decimating the ranks of the starfighters, and leaving only Alex and Grig to fight for the freedom of the universe. 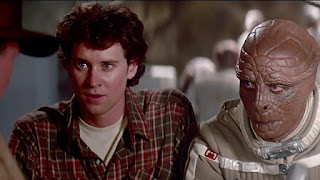 It is now up to Alex and Grig to save the universe.

Alex is trained to be a pilot and sent off with Grig to fight the Emporer Xur in a fighter craft called a Gunstar.  Caution: Spoilers immediately ahead!

Thankfully, the Gunstar is equipped with a powerful new weapon, called the "Death Blossom." 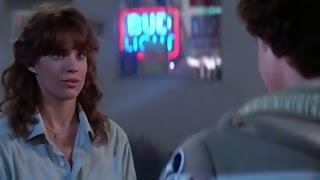 Suffice it to say, the universe is saved and Alex returns to Earth a hero. Here he is with his girlfriend.


The movie has quite a following, and its a fun and positive little sci-fi adventure that was truly of its time. And true to its time, it encouraged you to look to the future with hope. 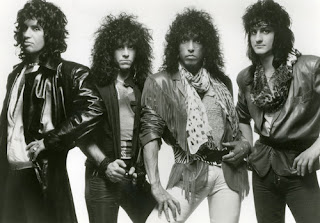 Back in the '80s, I had a close friend who was a major fan of the group Kiss, a '70s era group that was having a second life in the era of '80s glam metal. Although I was never quite into Kiss as was my friend, it was an additional interest alongside my overall love of music as a teen. 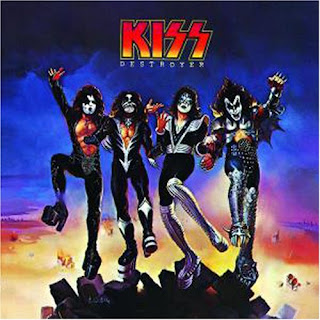 In the '70s, Kiss was popular as a glam rock band known for its hard rock and over the top showmanship. Their trademark was wearing makeup which obscured their actual identities entirely, and instead substituted comic book style characters: Star Child (Paul Stanley), the Demon (Gene Simmons), Space Ace (Ace Frehley), and Catman (Peter Criss). 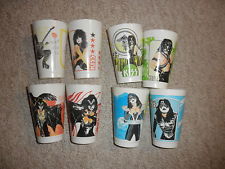 I was a pre-teen and not so much into music at the time, but it was hard to miss Kiss, as their presence was everywhere around 1977-78. I remember that Majik Market featured a line of Kiss memorabilia cups. I was still not too familiar with music from the group, since music in general really wasn't my thing, and this group of makeup-wearing showmen remained kind-of a mystery to me.


By the early '80s, two of the original Kiss members (Criss and Frehley) were replaced with new members (at various times, Eric Carr, Vinnie Vincent, Mark St. John, and Bruce Kulick), but Gene Simmons and Paul Stanley remained (and would remain) as the groups mainstays. During the early '80s, as musical tastes changed, Kiss tried their effort at a concept album, Music from "The Elder," (1981). The song "A World Without Heroes" was from this album, and as you can see, Kiss was still in their trademark makeup.

I was still not very familiar with Kiss at this time, as I was just beginning my teen years and just starting my love affair with music, especially rock music of all sorts. 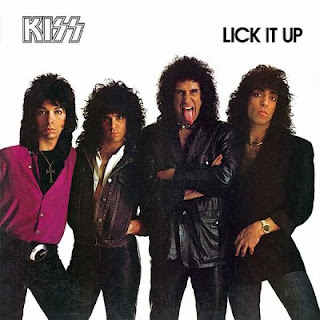 In 1983, Kiss broke its '70s era taboo, and removed their makeup. During this time, I was beginning to truly delve into music, and was interested in the news that Kiss- that Kiss, the one with the makeup, was now appearing without their makeup. Their first album in this new, makeup-less incarnation was Lick It Up (1983), an album I remember appearing in record store shelves and attracting a certain curiosity from me since I remembered the group's prior makeup and glam period.  I did not buy the album, though . . . I didn't have all that much money and there was just so much cool music out there to buy. And, after all, Kiss really had not been my thing before that.


My exposure to '80s-era Kiss music happened a little later, when their song "Heaven's On Fire" (from 1984's Animalize album) appeared on the radio. I listened with rapt attention when it was announced as a new release. . . this was Kiss, and they were back again and taking their place amidst the new surge of '80s glam metal.

My interest in '80s-era Kiss culminated around 1987, when my Kiss obsessive friend went to see a Kiss concert in a nearby city. My parents disapproved, but I wanted to go anyway, so I snuck out and went to the concert anyway with my friend and several others. I remember they played not only their '80s era songs, but also did an intense and audience arousing rendition of their 1976 rocker "Detroit Rock City." My effort at teen rebellion concluded when I got home and had to face my parents' displeasure and punishment.

In later years, Kiss would again don their makeup, and would essentially take up a role of rock elder statesmen of a sort. . . reminders of an era when rock ruled the airwaves and the hearts and minds of the young. But, I will always remember that distinctive era when Kiss adopted the the makeup-less role of a member of '80s glam metal elite. And I still don't regret going to that concert!!

Email ThisBlogThis!Share to TwitterShare to FacebookShare to Pinterest
Labels: '80s Music, Eighties, Growing up in the 80s, Music Video

Repost: All Those Years Ago

One last summer memory. This is a re-post from a post which originally appeared March 25, 2012. 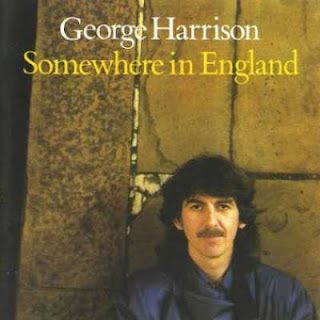 I remember the summer of 1981, and the song "All Those Years Ago," which was very frequently on the radio during that time.  The song was by former Beatle George Harrison, and although it had originally been written prior to John Lennon's passing, Harrison re-wrote the lyrics as a tribute to his friend and former colleague.

During that year, as a rather nerdy and insular 11 year old, I was not very familiar with popular music, including that of the Beatles. I was not even very knowledgeable with the artists most associated with the early '80s, although being anywhere near a radio ensured that I was at least familiar with some of the songs then playing. "All Those Years Ago" remains in my mind as a familiar memory because my family took a road trip to Washington D.C. that summer, and Harrison's song was frequently on the radio. 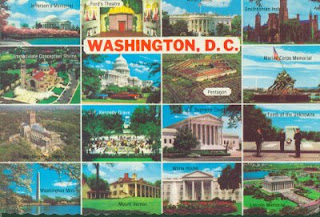 My closest association of that song, therefore, involved hearing it often as we rode down highways in a 1976 Ford Granada, a cooler of ice water in the car with us, stopping at Days Inns and Shoney's restaurants along the way, the '70s era vinyl of the Granada becoming hot in the sun as we got back in after each stop.

I did not know what the song was about, but the tune and the words stayed in my memory. And so did the trip. 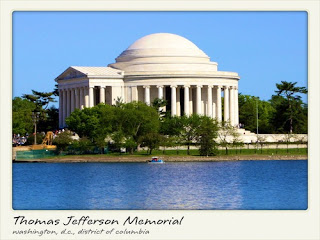 I remember when we got to Washington, D.C., my parents made it a point to make sure we saw all the major sights: the Capitol (we took the tour), the White House, the Lincoln Memorial, the Jefferson Memorial, the Washington Monument (we went to the top), and Ford's Theater (where Lincoln was shot).

One of my fondest memories was visiting the air and space museum of the Smithsonian, which fed my strong interest in the space program, an interest which is still strong in me today.

And it was wonderful just seeing Washington, D.C. itself, this unique city with all the monuments, all of which greatly impressed the 11 year old I was at the time. (We rode the Washington D.C. subway... woohoo!!)

As I grow older, I can't express how much I cherish these memories of being together with my family. Just the happiness of being on a trip, in the heat of summer, with my family. . . literally all those years ago.

As I grew older, my interest in music grew very strong indeed. I'm not sure how I could have gotten through my teen years without it. This included not only music from my own teen era, the '80s, but also from other eras, especially the '60s. I grew to appreciate just how special was this group from the '60s, The Beatles. John, Paul, George and Ringo. The Fab Four. Rubber Soul. Sgt. Pepper. Abbey Road. Let it Be.

And I came to know what "All Those Years Ago" was all about. A tribute to a fallen musical great, and to an idealist who inspired so many: John Lennon.

What is often not known, is that it represented a rare reunion of the three remaining Beatles. The song was ostensibly that of George Harrison, and it featured his lyrics and his vocals. But they also featured the vocals of fellow Beatle Paul McCartney and his wife, Linda, and Paul's fellow Wings musician Denny Laine. Ringo Starr played on drums, and Al Kooper was on keyboards. A rather unique song.

And a unique example of how songs can have so many meanings for us. There are the meanings which a song was originally crafted for, and for which so many may give it. And there are also the personal meanings which attach to a song, and which derive from personal memories, memories of things that happened all those years ago . . .