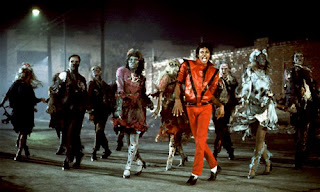 Darkness falls across the land
The midnight hour is close at hand
Creatures crawl in search of blood
To terrorize y’awl’s neighborhood
And whosoever shall be found
Without the soul for getting down
Must stand and face the hounds of hell
And rot inside a corpse’s shell
The foulest stench is in the air
The funk of forty thousand years
And grizzly ghouls from every tomb
Are closing in to seal your doom
And though you fight to stay alive
Your body starts to shiver
For no mere mortal can resist
The evil of the thriller
-Vincent Price, off of an '80s classic,
Michael Jackson's "Thriller"
The videos a classic too!!
Happy Halloween !!!
Posted by Lazlo at 5:20 PM 3 comments: 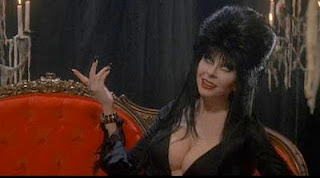 
Her popularity spread beyond the program to include commercials and other appearances. Here she is doing a commercial for Coors Lite beer.

And here is a gratuitous, completely unrelated song from the early '80s by the Oak Ridge Boys, which I just put on here for the heck of it. I dunno, but I'm scared already.

Elvira, Elvira, my heart is on fire for Elvira.
Eyes that look like heaven, lips like sherry wine
That girl can sure enough make my little light shine
I get a funny feelin' up and down my spine
'Cause I know that my Elvira's mine
Posted by Lazlo at 4:45 PM No comments: 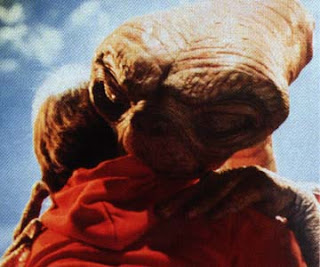 I remember when my parents took me to see E.T., '80s sci-fi classic from Steven Spielberg.


The movie came out in June 1982, so this must have been mid to late late '82. I was a somewhat nerdy, awkward 12 years old loner, often in living in my own odd dreamy world. The fact that I was also an only child added to my solitary nature, I suppose. But I was quite close to my parents, although sometimes I even felt misunderstood by them as well, and this would occasionally lead to conflict in my teen years. But this memory was one of being close to them, and I treasure it now as I sit here writing about it.


We went to see the film at a small, one theater cinema in the downtown of our small home town. It was an old theater that had been there seemingly forever, and was still there in the '80s. It was in the very midst of the fan mania that developed over the film, and there was a long line that stretched around the entire front of the small theater and around the side to the parking lot out back.


We took our place in line, and when we got inside the theater was packed to capacity, with every seat filled.  At that age, I was not yet used to going to see movies at the theater, so the whole thing was quite new to me. I remember we got some popcorn and Coke, and took our seats in the crowded theater. I also remember that in the midst of the movie, someone spilled a drink a row behind us. But I remember the experience fondly. 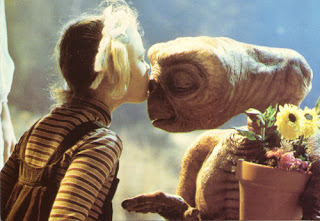 I remember the pleasure I got in seeing this beautiful film.  There was a tangible warmth about it, there were so many different details that seemed to shine through about the film. I remember the funny scene where E.T. inspires the young protagonist, Eliot, to come to the rescue of the frogs which were to be used during his school's science class, and he proceeds to cause havoc by freeing all of them in the midst of class. I also remember that my mother cried when E.T. briefly appeared to die, and I remember the joy that came when he miraculously revived and was alive. 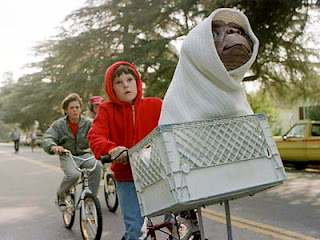 It felt like I was part of some wonderful phenomenon that all of America was participating in, and maybe beyond our borders to the world.  I somehow felt like I identified with the young protagonist Eliot, played by actor Henry Thomas. But then, didn't we all identify with young Eliot at that young age, befriending this wondrous being from another world. 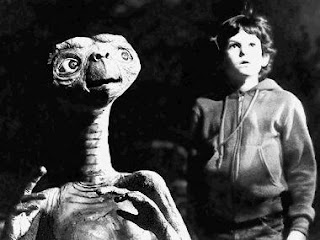 Email ThisBlogThis!Share to TwitterShare to FacebookShare to Pinterest
Labels: 80s Movies, Eighties, Growing up in the 80s

Speaking of Intros, here's the truly memorable Intro graphic which CBS used right before any special program. This graphic was used all through the late '70s and well into the '80s. As a young child, I became familiar with its appearance right before many holiday cartoon specials.
Those were the days.
Posted by Lazlo at 4:36 PM No comments:

Back in the late '70s and '80s, when there were only three big networks (ABC, NBC, and CBS), evening movies were a major staple of network television. Check out the amazing graphics from this ABC opening for its Sunday night movie. I remember this intro vividly from that era.
Heres the Intro for CBS' weekly Saturday Night movie. This Intro was used during the late '70s through the early '80s.  As you can see by both of the above openings, flashy graphics was big back then for movie intros. I guess the intent was build excitement for the movie about to be presented.
Of course, cable was also around at that time, but it was just beginning, and there were only a few channels. Here's a truly cool intro for the cable movie channel HBO.
Posted by Lazlo at 1:13 PM 3 comments:

I've been recovering from a strong bout of the flu, or something flu-ish. I guess spending so much time at home gave me time to think. For some reason, I started to remember some shows I used to watch late night on Fridays. Although my parents were always squeamish about my staying up late, they were a little more accepting of my doing so on Fridays and Saturdays, since the day after is not a school night.


In the mid-80s, when I was around 13 or  14, I used to love to stay up late on Friday nights and watch the programming of this particular local TV station, which ran several old series in a row. Even back then, I was into retro pop culture, and I loved seeing these old TV programs, all of which carried some of the flavor of their respective eras. 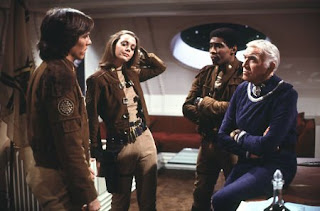 The evening would start right after the 11:00 news was over. At 11:30 would come the first program in my Friday late night schedule: the original Battlestar Galactica, which ran for a few years in the late '70s. I remembered the series when it first came out (and I was 7 or 8), but didn't get as much into it until my early teens and the shows re-emergence on late night re-runs.
I absolutely loved the original Battlestar Galactica, the '70s post-Sta Wars style sci-fi, the action, and in particular, the concept of a race of humans escaping from their doomed world, fighting off a predatory alien machanized race called "cylons," and risking it all for the hope of a new home: "a shining planet known as earth."
Heres the opening credits. The "shining planet known as Earth" reference was from the closing credits. Its all good. 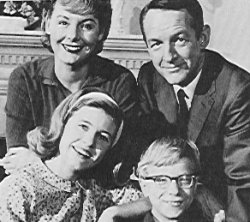 Now heres when some will consider my viewing choices to veer toward the geeky. But so be it! After the original Battlestar Galactica, the rest of the night veered toward the 1960s. The next show in line was The Patty Duke Show, which ran during the mid-'60s, around the time the musical British Invasion brought the Beatles and their kin to America's shores. 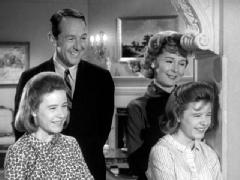 The Patty Duke Show featured the novelty of the namesake actress, the young Ms. Duke, playing two roles: that of nearly identical cousins, Patty and Cathy, who are otherwise complete opposites. This program is a remarkable time capsule of that era, and you can practically imagine the Beatles or the Stones or some folkie group on the radio. I remember loving this show for that reason, even as a someone in his early teens during the '80s. 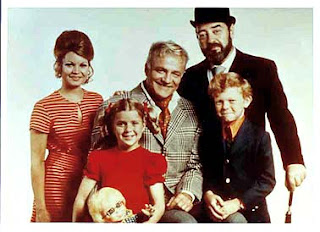 Then came two more light-hearted, gentle comedies from the late '60s and early '70s. First, Family Affair, a gentle late '60s sitcom, which I found sometimes a little too cutesy. But it was there to watch, so I did. 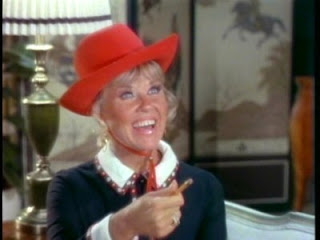 And then the Doris Day Show, another gentle comedy which ran from 1968 to 1973. In looking over the show again on Youtube, I can now tell that most of the shows I saw came from the early '70s, where a plot shift took the main character (Doris Martin) from being a widowed mother to two young boys living in a rural area, to moving to San Francisco and being a reporter for a glossy magazine.
As with the others, part of the appeal of the show was just how "'60s" (or early '70s, as the case may be) it all looked. This was not the '60s of long hair and hippies (although I kind like that too), but rather the modish Swinging '60s.

Now way past midnight, the evening ended with Elvira's show, featuring some usually cheap horror flick with the hostess' comments during breaks. By this point, I was probably very drowsy, and likely to either call it quits and go to sleep, or to fall asleep watching the movie. Suffice it to say this is the last I remember of those evenings.
Posted by Lazlo at 4:44 PM No comments:

Email ThisBlogThis!Share to TwitterShare to FacebookShare to Pinterest
Labels: '80s television, Growing up in the 80s, seventies, Sixties

Heres a somewhat strange, yet enchanting performance from a 1979 episode of the Muppet Show. The guest performer was Crystal Gayle, and the song is "We Must Believe In Magic." I find the song hopeful, in a strange mystical sort of way.
Mad is the captain of Alpha Centauri
We must be out of our minds
Still we are shipmates bound for tomorrow
And everyone here's flying blind