A few days ago, the singer Don McClean revealed the meaning behind his enigmatic 1971 song, "American Pie."  He said, "Basically, in American Pie, things are heading in the wrong direction."

About today's America, he has said "[i]t is becoming less idyllic. I don't know whether you consider that wrong or right but it is a morality song in a sense."

"I was around in 1970 and I am around in 2015," he continued, "[t]here is no poetry and very little romance in anything anymore, so it is really like the last phase of American Pie." 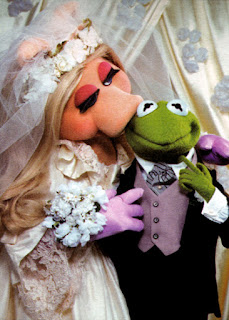 As if to prove this point, the latest saga of the Muppets supposedly has Kermit and Miss Piggy, the longtime love interests of Jim Henson's fictional brood, break up in acrimony.

OK.. lest anyone think I've totally lost my mind: Yes, I know the Muppets are fictional characters. They are the equivalent to cartoon characters and comics. They only exist due to the creativity of human beings, who are responsible for "bringing to life" the lovable puppets.

I also know that real life (the real life we all live in as real human beings) has a lot of hard and difficult and sad things that happen. Relationships break up, people suffer poverty and disease, good people struggle through all sorts of negative things.  Moreover, there are even some comics and cartoons which are, by intention, realistic, and deal with such serious issues.

But what utterly bothers me about the latest twist in the Muppets saga is that the Muppets were never like that. They were always lighthearted, and the stories surrounding the Muppets (like the hopeful story in 1979's The Muppet Movie) are ususally delightful and positive. That's what Jim Henson created when he made The Muppets.

What exactly do the artists and creative people, no doubt good people, think they are doing by inserting such a cynical and negative plot twist into the story.  Yes, breakups happen in real life. They are happening a lot lately, in fact.

But have we become so cynical that we are unwilling to let our fantasy life, the very thing Jim Henson contributed to when he created his delightful Muppets, take on a more positive tone?  Do we really need to have everything (as it seems to be lately) devolve into cynicism and negativity?  Are we so beyond the wonder and sweetness that existed when we first saw the Muppets so long ago, that we need them to be every bit as sad as a reality TV series?

What would Jim Henson think?

Have we lost this in our society? The capacity to hope, and dream big dreams?

Since I'm referencing this great song, here's Don McClean's 1971 epic "American Pie," with a video that came out in 1989.