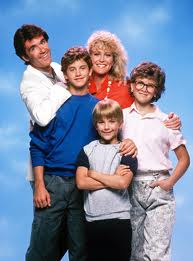 I used to enjoy the '80s sitcom Growing Pains. There was something about all of the characters that I could like and appreciate.
The parents, Jason and Maggie Seaver, were baby boomers, a member of that extraordinarily large generation which came of age during the '60s, and which were often featured on many an '80s movie or TV show. Boomers, who at the time were in their 30s, and many of whom were what was then termed "young urban professionals" (or "Yuppies" for short), were most identified with the movie The Big Chill and the TV show Thirtysomething.  But they were everywhere, including sitcoms like this.
I kinda liked it, actually, since I had my own nostalgia for the '60s back then, and had a strong attraction to '60s culture. I remember there was an episode where some youthful acquaintances of the now middle aged Jason Seaver got together with him, and encouraged him to re-join in their effort at reviving the rock band that they had been in during their teen years.
Their daughter, Carol Anne Seaver, was a nerdy, intellectual kid. I was too, and I identified with her most. Later on in the show, she was shown going off to college, and interacting with other would be intellectual youths.
Their older son, Mike (played by Kirk Cameron), was initially a goof off, but later on became involved in the theater. As a high school drama kid, of course I could identify with his interest, and his transformation into a "theater kid."
Then there was their younger son, Ben, who was just sort of there. He was okay though. 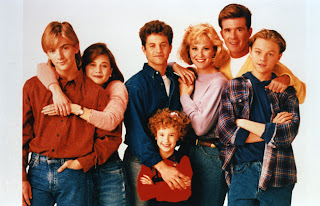 As time went on, the family changed, aged  and grew. New characters were introduced, including one played, in one of his first roles by the very young Leonardo DiCaprio.

Only somewhat related to the topic: Here's Jim Carrey doing an pretty good impersonation of Alan Thicke, who played the father, Jason Seaver. From a 2011 episode of Saturday Night Live.
Posted by Lazlo at 7:40 PM 2 comments: