I've got several posts in the works, but unfortunately the demands of my job, among other things, have slowed their completion. Rest assure I should have them posted soon. Keep up with this blog.

In the meantime.. here's a re-post from 2012.  Disney recently announced that it would soon cease showing the Captain EO film at its Epcot them park, so my the timing of this re-post is good. 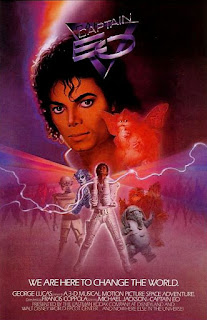 I recently visited Epcot, at Walt Disney World near Orlando, Florida.
Epcot is very dear to me because it opened in the '80s to much fanfare, and was the location of many a family visit... and of so many of my youthful '80s memories. Epcot, in so many ways was very '80s when it opened, and it was very much a product of its times... the hope and positive vibes and energy of the '80s . . . the visions of the future of that era. 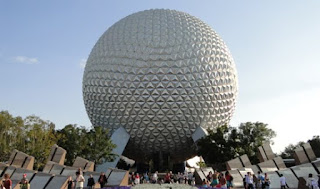 So much has changed since the '80s... and in some ways Epcot's mission has changed as the decade of its birth fades into the past... and yet there are still so many echoes of the '80s in Epcot... in its architecture and some of the rides which have survived since then.

The big ball, above, for example, is actually called Spaceship Earth, and it houses a ride that existed when Epcot first opened... it has had a few changes here and there... but its basically the same.. a ride through the history of communication. Maybe I'll do a post about it some day.

I do still love to visit Epcot, in part for all these '80s memories, and also because it remains to this day a very positive hopeful place. 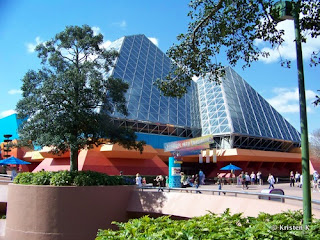 One place that has changed a lot over the years is the pavilion which, at least back in the '80s, was known as Journey Into Imagination. Although the exterior looks very much the same (thankfully! I like it), the rides and shows inside have gone through a major evolution through the years. 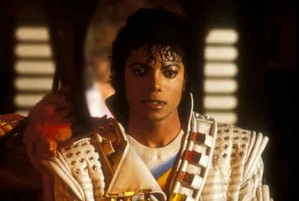 Which brings me to what this post is really about. Back in 1986, when Epcot was still new, at the very height of the vibrant '80s, the Journey Into Imagination pavilion featured a new 3-D sci-fi space film by George Lucas, and starring Michael Jackson, called Captain Eo.

Captain Eo premiered at the very peak of Jackson-mania, when Michael Jackson's image was full of the very hope and positivity of the '80s decade, before his later troubles, and before the world seemed to become a less optimistic and less hopeful place. At least that's how I perceive it.

Recently, after a long absence, Captain Eo was brought back to Epcot, to the very same Imagination pavilion that originally featured it... and providing a wonderful '80s flashback to those who well remember that era.

And here it is, above.

This wonderful short film showcases so much of the good of the '80s: the optimism, the wonderful sci-fi fantasy which so dominated the era, the color and vibrancy... and Micheal when his music and message was a ray of hope that couldn't help but make you smile.

I enjoyed seeing Captain Eo again at Epcot, and am grateful to Disney for bringing it back.

When the world sometimes seems to be growing darker, maybe we need a wonderful flashback like this to remind us to see things in a positive light, and to look for the best in others. Thank you Michael Jackson and thank you George Lucas, for this, and thank you Disney for first presenting this to us, and for bringing it back again just when we need it.
Posted by Lazlo at 10:00 PM No comments: