Head of The Class 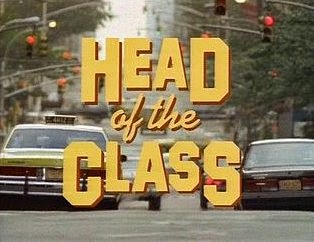 In 1986, a sitcom premiered about a class of gifted, high IQ students, and their inquisitive teacher: Head of the Class.  The show lasted from '86 to 1991.

I've heard this show referred to as Welcome Back Kotter with nerds, making reference and comparison to a similar '70s era show about students and teachers.  Kotter, by contrast, was about under-performing students. 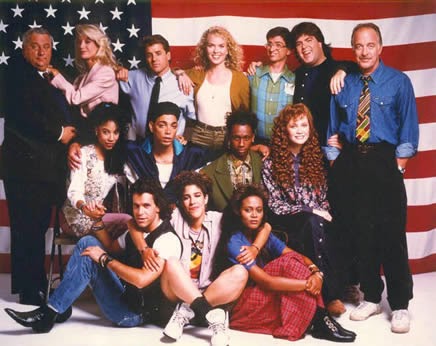 Howard Hessman played the teacher Charlie Moore at the beginning of the series, and through most of the show's run. 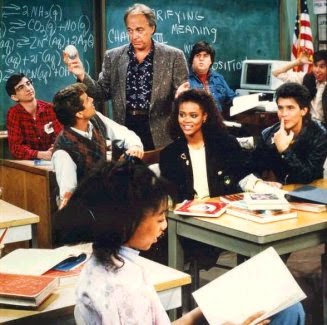 To be honest, I have a bit of a selective memory about the students. There were so many of them that I seem to recall only the ones that made the strongest impression on me. I do remember how each student was a unique personality, creating a class where each one's quirks and oddness was brought out. I recall there was a sensitive, an artsy girl, and a leather jacket wearing rebel guy. 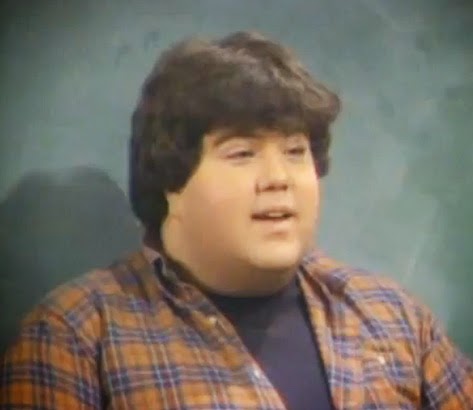 Dennis Blunden, played by Dan Schneider, was probably most memorable to me. He was a heavyset and somewhat sloppy kid, kind of like myself at that age. He was also a computer whiz, which I was not.

It turns out that in the years after Head of the Class, Schneider has become quite successful as a producer of family oriented shows on Nickelodeon. 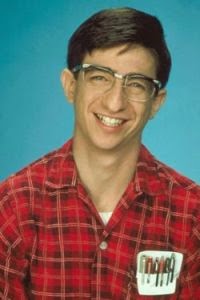 Arvid Engen, played by Dan Frischman, was also memorable as the stereo-typically skinny and bespectacled science nerd of the group.

I've had friends who resembled Arvid (who, I suppose, would play nerdy teen versions of Laurel in contrast to my Hardy). 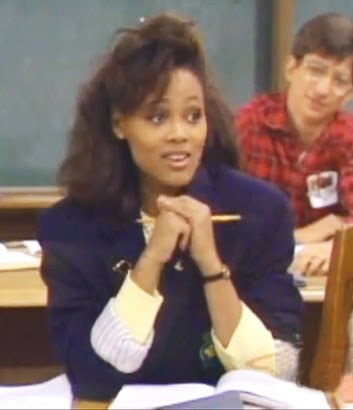 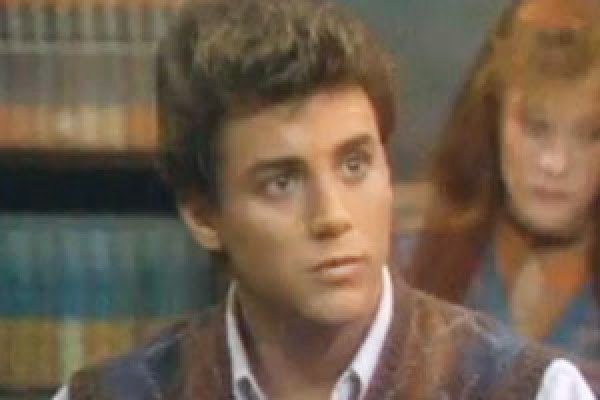 I remember an episode where the class visited the Moscow, which back in the '80s was still in the Soviet Union during the waning days of the Cold War. I recall that they had a scene where the staunchly pro-American Alan got into a debate with an equally adamant pro-Commie Soviet student. I remember thinking it was a pretty unfair comparison, as if the less conservative students wouldn't have reason to oppose Soviet totalitarianism.  In any case, just a few years later Communism would fall, which I guess showed you who really won that debate. 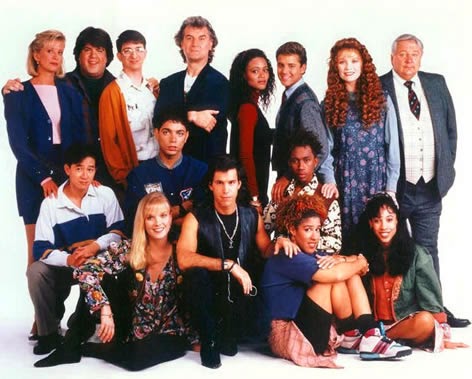 In 1990, toward the end of the show's run, Billy Connolly replaced Hessman, playing teacher Billy MacGregor.
Posted by Lazlo at 11:58 PM No comments:

This past week included the anniversary of the gigantic, two stadium Live Aid concert, which was held on July 13, 1985 in Philadelphia and London.

It was one of the most momentous events of the 1980s, and one that I remember vividly and quite fondly. Being the music nut that I was at the time (and still am), I listened intently to the coverage of the concerts which was being played over the radio.  At night, television coverage kicked in, and I saw that too.

Above is U2 at Live Aid, giving a the classic performance of "Bad."
I love the atmospheric sound of this song.

Here is the first part of a documentary I previously posted, which gives a good account of the run up to the big event. As noted in the documentary, Live Aid was part of a big effort to aid victims of a devastating famine in Ethiopia.

One of the documentary's most satisfying parts for me is the account of Bob Geldolf, musician with the Boomtown Rats and one of the main organizers of the event, telling off the brutal dictator of Ethiopia to his face.


Here's part 2 of the documentary.

Unfortunately, there was some controversy over whether sufficient amounts of the aid had gotten to the victims, and whether the organizers and supporters of Live Aid had acted sufficiently to end some of the brutal practices of Ethiopia's communist government.  A 1986 article in Spin magazine gives that point of view.

Email ThisBlogThis!Share to TwitterShare to FacebookShare to Pinterest
Labels: '80s Music, Eighties, Growing up in the 80s, U2

Here's something to cheer about.  A short time ago, I posted my tribute to the great '80s comic strip Bloom County.   The strip was one of the great pleasures of the eighties, running from 1980 to 1989, and caught the spirit of that odd and quirky decade.

Now, a few days ago, we received word that the comic's creator, Berkeley Breathed was bringing back the comic on an irregular basis, publishing the new strips on his facebook page.  The second installment of Bloom County 2015 just came out, with Opus pondering his status as an eighties relic. (Click each of those links and the new strips are in the articles.)

As an eighties relic myself, this is joyful news indeed!

Just noted this article by Sean Nelson in The Stranger, titled "I'm Trying to Stay Excited About the Return of Bloom County."

Nelson makes some good points. He says that he has been very excited about the return of Bloom County.  But he also "can't help wondering whether maybe Bloom County was so about the ‘80s that it never should have left them." Further along, he notes: "When Breathed retired the strip in 1989 (replacing it with the conceptually distinct, ultimately indistinguishable, yet massively inferior Outland for reasons passing understanding), it marked the end of something very dear to those of us whose little sensibilities it helped shape. . . . But the ‘90s came in hard and the collective comedic sensibility morphed immediately into the assumption of bemused skepticism."

Nelson struck on something very true in his article. Bloom County came out at a very unique time, and was very much a part of its time. The eighties, for all its good and bad, had a particular sensibility . . . one that allowed for a particular, lighthearted, sometimes oddball, sometimes absurdist, comedic view of things.  Notably, the '80s featured a blossoming of the comics pages with this quirky sensibility, with the likes of Bloom County, Calvin and Hobbs, The Far Side, and the more mainstream Garfied.

For so many of us, the comics pages of the '80s brought many a joyful time. But, as they say, all good things must end. It is true that when the '90s came with its darker worldview, it swept all of that away. The end of that era really was something that many of us still feel . . . the feeling of something we knew in our youths, but now missing.

Nelson concluded with a show of support for the return of Bloom County, and this hopeful thought (which I share):

"Maybe now that we appear to have re-entered an age of piety, cant, and psychotic superciliousness, the time will be ripe for the return of Opus, Bill the Cat, Steve Dallas, Binkley, Cutter John, et al.—representatives of a time when you didn’t have to say anything too off-the-wall in order to be the good kind of shocking."

Okay, this has very little to do with nostalgia... but it involves one of my other fascinations: space and the space program.  Just wanted to note that I'm one of those space geeks who are excitedly watching the encounter with Pluto by NASA's New Horizon's space probe.

This visit to Pluto completes the inventory of the major members of our solar system . . . the last such world to be visited by an earth probe.  Exciting stuff!

Actually, it kinda brings this to mind . . . from back when Pluto "little Pluto" was "the farthest planet from our sun."  Now its considered a dwarf planet, but its the biggest member of the Kuiper Belt.
Posted by Lazlo at 10:07 PM No comments: 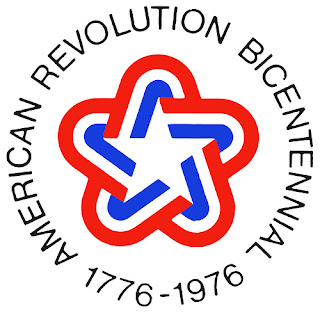 Here in the United States, were about to celebrate Independence Day on July 4th.  This brought back memories of the bicentennial of U.S. independence which was commemorated with major celebrations in 1976.  I was just 6 years old at the time, and in the first grade, but I remember how much emphasis was placed on it at the time.  Red, white and blue was everywhere. Commemorative bicentennial quarters were issued.  And people took time to take note.

Products were issued with commemorative bicentennial packaging, and the spirit of '76 was front and center on television, as in this Coke commercial.

Here's the ABC news coverage of the July 4, 1976 celebrations.  There was a fantastic parade of tall ships in New York, a speech by President Ford and the ringing of the liberty bell.

This was the post-Vietnam, post-Watergate era, and the U.S. was still recovering from the difficult and stormy period that was still a fresh memory. In a way, the bicentennial was part of the healing process.


Of course, as a little kid, I didn't know all that. . . but how could I forget all the patriotic color and the fanfare.  It's a good memory.
Posted by Lazlo at 6:58 PM No comments: