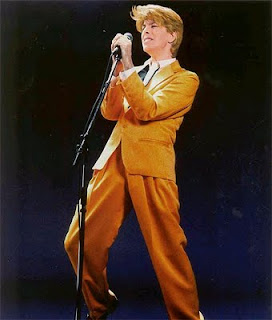 David Bowie burst forth in 1983 with a new, more mainstream image. Whereas a great deal of his '70s work conveyed an alienated and searching demeanor, his '80s material had a more positive, yet still individualistic and arty, vibe.

In 1983, Bowie rode the wave of New Wave/New Romantic mus
ic which then dominated MTV, and which served as one of the main contributors to the new media of music video. His music, as intelligent and quirky as ever, had a new energy. For example, here is his video for "China Girl" from his 1983 Let's Dance album.

Bowie joined the great Second British Invasion which was at that time crashing onto American airwaves. And his fellow British musicians of that period were often Bowies own admirers, who has grown up on, and were inspired by Bowie in his earlier '70s incarnations. Bowie was the topic of the cover story of the July 18, 1983 issue of Time  magazine ("David Bowie Rockets Onward."), which had the following observations:

"At 36,  the oldest fresh force in rock, this new Bowie seems to share few
qualities with the old Ziggy, the polymorphous camp extravaganza, the most gilded
lily of rock's gaudiest age. What binds these identities together is a gift that is
cerebral and carnal, frequently danceable and always entertaining. His former
crony Lou Reed has sung about it. Deep down inside, Bowie has
a rock-'n'-roll heart. . .

. . . Musically however, Bowie always seems to know what time it is; no need
for verification. His new material is unabashedly commercial, melodically
aliterative and lyrically smart at the same time. Bowie made some
of the most adventurous rock of the past decade.  When it did not work,
it sounded trendy and tuned out. But when it did hit, which was most of the time, it
laid down rules and set new marks for others to follow. Bowie kept the cutting edge
keen. There are few punks or New Wavers or art rockers or New Dancers
dancing to New Music who do not owe him an abiding debt. Every one from
Gary Numan to Talking Heads and Culture Club ought to make a
deep bow in his direction.

Bowie, ever quirky and multifaceted, dabbled in various art forms... music, video, film, theatre. Early in the decade, he performed as the title character in a production of The Elephant Man.  And above, his 1984 hit song "Blue Jean," featured on his 1984 album  Tonight, also was featured in a short film called Jazzin For Blue Jean. The video for the song features a clip from the film.

In 1985 Bowie performed a duet with Mick Jagger, of the '60s sould classic "Dancing in the Streets." 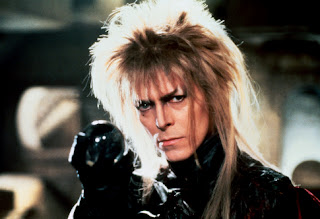 And  in 1986, Bowie perfomed in the fantasy film Labyrinth, produced by Star Wars'  own George Lucas, and featuring creatures created by The Muppets' inventor Jim Henson. 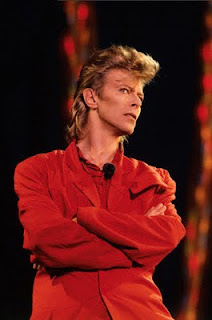 At the conclusion of the decade, Bowie found himself at his most mainstream, a situation which would lead to the criticism by many that he was not as creative as he had been in the seminal years of the 1970s. Nevertheless, the flip side of that is that Bowie was probably never as influential or as respected as he was in the 1980s, as the wave of new musicians cited him as a major influence, and the increasingly theatrical and multi-media nature of '80s music followed in his footsteps.
Posted by Lazlo at 7:40 PM 2 comments:

David Bowie, the seminal musician who played such a role in '70s and '80s music, has emerged from years of inactivity with an interesting new song and video. On January 8, 2013, Bowie's 66th birthday, he released "Where Are We Now" an unusual and penetrating contemplation of things past and present.
Its a moody and brooding song, seemingly filled with nostalgia.  The imagery and lyrics evoke Bowie's time in Berlin during the late '70s, a time when he produced, together with producer Brian Eno, a trilogy or searching and innovative albums. "A man lost in time. . . walking the dead," he sings.
Frankly, moodiness included, I cant help but feel that the song captures some of my own feelings of wistfullness and thoughtfullness I sometimes find myself feeling recently.

This served a good time for me to finally complete a post on Bowie I had been long planning... which Im actually going to divide into two posts. 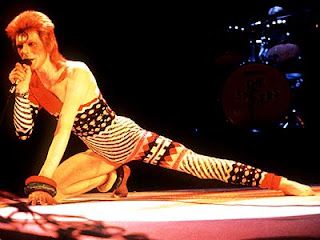 The 1980s could not have been what they were without Bowie, as his influence spread heavily among the New Wave/New Romantic groups which dominated the MTV video scene, and the Second British Invasion of the early '80s.
Bowie has been known as a chameleon of sorts, working his way through various artistic personas. His big breakthrough came with the his character "Ziggy Stardust," an androgynous space traveler turned rock star which who was also the title character of the concept album, The Rise and Fall of Ziggy Stardust and the Spiders from Mars (1972).
Over the course of the '70s, Bowie went through various stages, from the Ziggy-dominated glam era of the early '70s, to a more cool and icy era of the Thin White Duke, to the late '70s Berlin era of cutting edge music. His characters all had in common a sense of alienation, separateness, and individualism. At one point, he starred as the title character of the Nicholas Roeg film, The Man Who Fell To Earth (1976), about an space alien disaffected and separate from the world around him.
Bowie's visually stunning image, as shown in the above '70s video for "Life On Mars?" influenced many an artsy rock kid, many of whom dominate the MTV era with colorful and creative videos, and quirky music. Boy George, Annie Lennox, Duran Duran, all drew inspiration from Bowie. 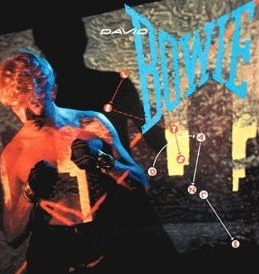 Bowie himself became a major part of the Second British Invasion of 1983, with that year's Lets Dance album, and a hopeful, upbeat and vibrant new image. . . one which was perfectly in tune with the hopefulness and energy of the '80s. That positive spirit is shown in the catchy song and video, "Modern Love" from the Lets Dance album.
More on Bowie in the '80s in my next post....
Posted by Lazlo at 12:27 AM No comments: