When Crue Were Glam (Re-post) 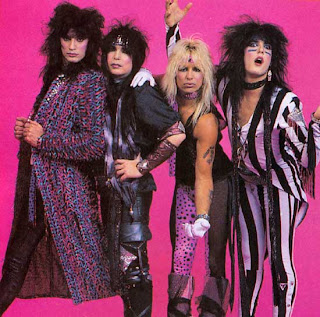 The 1980s was a great time for music, in part because there was just so much of it. So much variety... music of all kinds, and usually with a quirky and fun twist: New Wave, classic rock, Springsteen and Mellencamp roots rock, dance music, synth-pop, ballads, etc. etc.

Heavy Metal was one of the main aspects of '80s music, a kind-of mutant genre that created loud, aggressive, rebellious music. At a time when boundaries of all sorts had already been broken, and audiences had already been thrown everything except the kitchen sink, '80s metal groups were there to break that final barrier and throw you that kitchen sink. 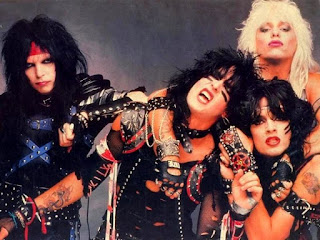 Motley Crue first broke into '80s popularity with a gruesome leather-clad appearance, and an album with a black cover and an ominous theme, Shout at the Devil (1983). Although a case could be made that the concept was as much as anything against the devil (after all, the albums' intro exhorted its listeners to "rise up . . . and shout at the devil"), Motley Crue were at the time the group that parents and censors loved to hate. 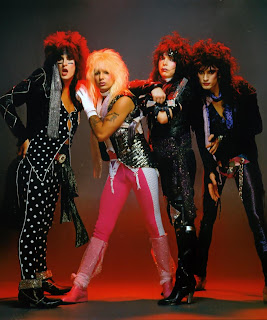 Then, in 1985, a change. At the time, Crue adopted a more glam (but I'm sure they would tell you, a still rockin) image, with their album Theatre of Pain (1985). Crue during this time were among a growing number of spandex clad, makeup wearing groups into what was known as glam metal, a genre that adopted the colorful, eye-popping glitter/glam rock styles which hearkened back to the early '70s, but added the ear-bursting heavy metal of the '80s.

It was during this time that Motley Crue's audience grew to include teens that may not have gotten what they were about during their earlier period. And they were capable of adding a soft ballad alongside their heavy rock.

Glam Metal spread far and wide... I always thought it fit well with the fun-loving, color-filled atmosphere of the '80s. 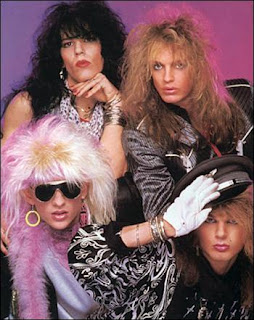 It shows how interesting a decade the '80s were, that such an overtly "macho" style as metal adopted such clearly androgynous styles without anyone even commenting. It was macho with makeup and eyeshadow. And it was perfectly and un-ironically accepted as such. 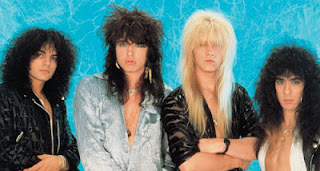 And, of course, this metal ball would not be complete without another big glam metal group, Cinderella.
Posted by Lazlo at 6:13 PM No comments:


Check out the Duran Duran concert at the 50th Anniversary celebrations of the Apollo 11 moon landing at Kennedy Space Center, Cape Canaveral, Florida.  Posted on my new blog project Oblivion Foodcourt.
Posted by Lazlo at 11:01 AM No comments: