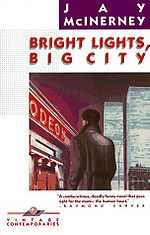 We are all familiar with the "brat pack" of '80s movie actors, but did you know there was also a literary brat pack as well?

Back in the mid '80s, a several young writers became associated with being the new faces of literature. Among them, Jay McInerney (Bright Lights, Big City), Bret Easton Ellis (Less Than Zero), and Tama Janowitz (Slaves of New York). The term "literary brat pack" soon began to be applied to this group, as well as certain other writers similarly associated. The works of these writers often involved the realities of modern life in the '80s, and were usually written in a minimalist, stripped down style.

I've always had a fondness for McInerney's first breakthrough work, Bright Lights, Big City. The novel, which came out in 1984, was unique in that it was told entirely in second person singular. It detailed the life of a young writer in '80s New York, who was working in the fact-checking department of a major magazine. The main character went through the process of disappointment with his profession, the difficulties of the break up of his relationship, and his ultimate disillusionment with the fast-paced Yuppie lifestyle which he had fallen into.

When I first read the novel, I was in college in the mid '90s, and already having major nostalgia for the '80s. I picked up Bright Lights, Big City, and was immediately drawn into this world of '80s upwardly mobile aspirations. The main character proved worthy of sympathy as he searched for himself amidst the chaos of his personal life and the fast moving urban world where he lived.

Here's a brief snippet from the novel that I always find myself returning to, I guess because I myself sometimes feel as the character here is described to feel. This excerpt is told, as is the novel, in second person singular:


Once upon a time, you assumed you were very likable. That you had an attractive
wife and a fairly interesting job seemed only your due. You were a good guy. You
deserved some of the world's booty. After you met Amanda and came to New York, you
began to feel that you were no longer on the outside looking in. When you were
growing up you suspected that everyone else had been let in on some fundamental secret
which was kept from you. Others seemed to know what they were doing. This conviction
grew with each new school you attended. Your father's annual job transfers made you
the perennial new kid. Every year there was a new body of lore to be mastered. The
color of your bike, your socks, was always wrong. If you ever go into psychoanalysis,
you will insist that the primal scene is not the encounter of parents in coitus: it takes
the shape of a ring of schoolchildren, like Indians surrounding a wagon train, laughing
with malice, pointing their vicious little fingers to insist upon your otherness. The
scene repeated itself in schoolyards across the country. Not until you reached
college, where everyone started fresh, did you begin to pick up the tricks of winning
friends and influencing people. Although you became adept, you also felt that you were
exercising an acquired skill,  something that came naturally to others. You succeeded
in faking everyone out, and never quite lost the fear that you would eventually be
discovered a fraud, an impostor in the social circle. Which is just about how you feel
these days. Even now, as you puff yourself up with tales of high adventure in
magazine publishing, you can see Elaine's eyes wandering out over the room,

leaving you behind. She's drinking champagne.