MTV: Video Made The Radio Star 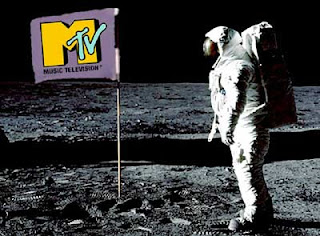 A belated tribute to MTV on their 30th annivaersary.

I was reminded by posts at Retrospace and Go Retro! blogs that MTV was celebrating its 30th anniversary.

Indeed, MTV was launched on August 1, 1981. According to Wikipedia :


MTV launched with the words "Ladies and gentlemen, rock and roll,"
spoken by John Lack, and played over footage of the
first Space Shuttle launch countdown of Columbia
(which took place earlier that year) and of the launch
of Apollo 11. Those words were immediately followed by the original
MTV theme song, a crunching classical tune composed by Jonathan
Elias and John Petersen, playing over photos of the Apollo 11
moon landing, with the flag featuring MTV's logo changing
various colors, textures, and designs.
﻿The innovative music channel would become a central part of life in the '80s, especially if you were young and into the vibrant music of that era.
I remember these colorful "I Want My MTV" commercials well.

According to Wikipedia the first music videos played on MTV were:


﻿Ironically, notwithstanding the name of the song, MTV probably brought more vibrancy and life to early and mid '80s radio, as it opened up the media to newer music groups
Posted by Lazlo at 12:27 PM 4 comments: