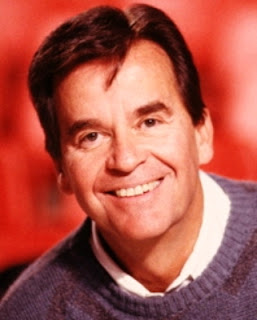 Dick Clark was practically an American icon by the time that I became familiar with him. His hosting of American Bandstand from the '50s through the '80s was a central component of rock era culture, and something well remembered by teens of several decades.
My first memory of Dick Clark was actually as he was serving as the host of the popular Pyramid game show back in the '70s. I was a nerdy (and weird) elementary school kid back then, and I suppose was more easily drawn to the glam and flash and humor of game shows than I was to rock music. I do remember that once, the high school chorus came to our elementary school, and one of the songs they played was the theme from American Bandstand. The leader of the chorus introduced the song by noting that we may recognize it from a show watched by our older brothers and sisters over in middle and high school. I remember at the time, it intrigued me that watching American Bandstand was somehow a sign of reaching a certain age.... that it was "older" kids (older from the vantage point of elementary school kids, of course) who watched this show.
When I reached the teen years myself, I followed the path of previous generations from the '50s onward, and quickly developed a love for rock and pop music. And I soon found myself turning in to the old classic, still alive and well in the '80s, American Bandstand with its host of many years, and still then vibrant and active as ever, Dick Clark. I've always been so glad that both Clark and his Bandstand were part of my '80s youth, with its New Wave and Michael Jackson, as it had been part of youths that grew up on Elvis and the Beatles and Motown and disco.
Dick Clark and American Bandstand: a rock era rite of passage.


Rediscover the 80s (click) has a great tribute to Clark.


Sadly, another figure from the '80s has passed away: Greg Ham of the popular '80s Australian group Men at Work.