Back in 1983, as the Cold War was in full swing, the German singer-songwriter Nena released a timely protest song that raised the concerns so many had about the threat of nuclear war. It became one of the most memorable and iconic '80s songs, and a reminder of one of the more scary aspects of living in the '80s.
The Cool video illustrates the point.

Nena became one of a few German new wave artists that had hits in the United States, along with Falco ("Rock Me Amadeus") and Peter Schilling ("Major Tom").

Welcome Nena!
Posted by Lazlo at 11:56 PM No comments:

To Those Who Gave All

Deep respect and honor to those whose lives were taken on 9-11, including those who died in the towers, on the aircraft that were taken as weapons, in the skies over Pennsylvania, in the Pentagon, and among those first responders who were trying to save people and lost their own lives in the process.

Thank you to all first responders who risked all to do good on that tragic day, and every day.


Above, Sir Paul McCartney's simple, uncomplicated, but heartfelt tribute.
Posted by Lazlo at 1:35 PM No comments: 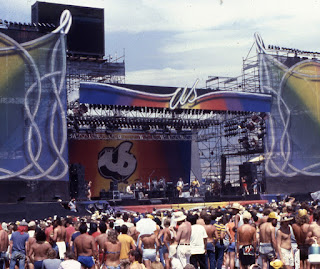 Early on in the '80s, just as MTV was starting to take off, Apple Computer mogul Steve Wozniak sought to put together a concert festival that combined the biggest bands with the latest technology. 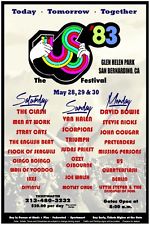 The result were the Us Festivals.  So named to encourage community in the dawning decade of the '80s, in contrast to the "Me Generation" of the '70s.

The first Us Festival was held over the course of three days, during the Labor Day weekend of 1982. This first festival included such cutting edge musicians as Pat Benatar, the Talking Heads, Oingo Boingo, and the B-52s, along with classic acts such as the Grateful Dead and Jimmy Buffet.  Above is Pat Benatar rocking the Us Festival with her very '80s style.

A second Us Festival was held the following year, during Memorial Day holiday of 1983. This time, the festival was a total of four nights, with each night devoted to a particular category of music: New Wave, Heavy Metal, Rock, and Country.  Here's some footage from the Us '83, including Missing Persons performing the very, very new wave '80s song "Walking In L.A."
Posted by Lazlo at 10:57 PM No comments: