I have some strong and very positive memories of Mary Tyler Moore, from her time playing Laura Petrie in The Dick Van Dyke Show, to her groundbreaking role as Mary Richards in her own Mary Tyler Moore show.  Mary Tyler Moore always had a way of portraying wonderfully sympathetic, and lovable, but also strong characters. She was an icon who really did "make it after all."
Posted by Lazlo at 11:18 PM 1 comment:

In April 2012, this blog had a post titled "When Computers Became Cool," about the growing status of computer geeks in the '80s. (That post is re-posted in its entirety below this post.)  I found an old 1984 article which serves as a good follow up to this theme.  On May 8, 1984, the Wall Street Journal ran an article entitled "Knowing a Computer Can Be Fastest Way To a Woman's Heart: The New Big Men on Campus Find Technical Wizardry Is Quicker Than Liquor." 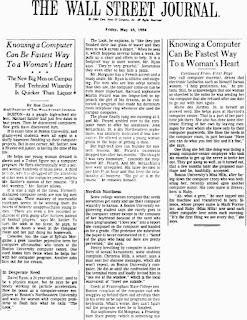 Knowing a Computer Can Be Fastest Way To a Woman's Heart: The New Big Men on Campus Find Technical Wizardry Is Quicker Than Liquor
The Wall Street Journal
Friday, May 8, 1984

As a gangly high­school student, Michael Sattler had just five dates in four years. Then he discovered computers. Now girls have discovered him.

It is exam time at Boston University, and glassy­eyed students work all night in a stuffy basement finishing up their computer projects. But in one corner, Mr. Sattler, now a 20­year­old junior, is having the time of his life.

He helps one young woman dressed in shorts and a T­shirt figure out a computer program. He flirts electronically with a second woman hundreds of miles away. A third female, who has shrugged off the attentions of other men in the computer center, solicits Mr. Sattler's opinion of her résumé. "It's idol worship," Mr. Sattler allows.

It is also a sign of the times. Formerly disdained computer nerds are now big men on campus. Their mastery of inscrutable machines seems to be winning them the hearts of hithero unapproachable young ladies. "There are even a few recorded instances of girls going after hackers instead of football players, says Mr. Sattler. To turn the odds in his favor, he says, he spends 65 hours a week in the computer room and not just doing his homework.

It didnt quite turn out as the article predicts, but it shows what an emerging force computers were back then. Now theyre everywhere, and everyone is at least a little bit computer geek. 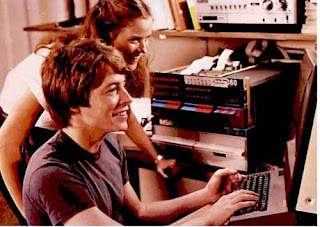 With the advent of the first personal computers during the late '70s and early '80s, there dawned a new era of coolness for computers and those who used them. Suddenly, those quirky, savvy "computer geeks" were the epitome of chic. There was even a certain shadowy sense of power that was perceived to derive from being hip to all the secrets and esoteric knowledge of computers. 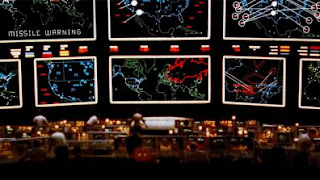 One of the best examples of this was the sci-fi flick Wargames (1983).

Wargames was the story of a young computer hacker, played by Matthew Broderick, who succeeded in hacking into a powerful defense department computer which was enabled with the ability to launch nuclear missiles. Although the character played by Broderick originally thought that his interaction with the defense computer (dubbed the "WOPR") was just a game, things quickly escalated to the point of nearly causing a nuclear war.  The movie's portrayal of the race to prevent nuclear catastrophe, and the climactic ending, served as a moral lesson in the midst of the Cold War.

Wargames became a popular and well remembered '80s movie classic, and also an example of the emergence of the computer geek. 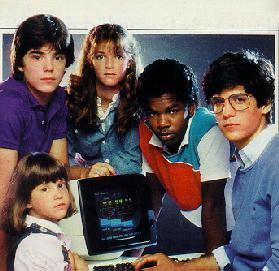 A less easily remembered TV show that came along around the same time was Whiz Kids. Whiz Kids aired on CBS during 1983-84, a featured a story line about a group of computer savvy young teens who use their computer skills to fight crime.


Here is the opening credits to the short-lived Whiz Kids.

Afterward, computers, and those who kept the knowledge of computers, began to appear in many of the movies of the '80s. This included many of the nerd oriented flicks that appeared during the mid '80s, such as Revenge of the Nerds (1984) and Weird Science (1985).
Posted by Lazlo at 1:12 PM No comments:

Email ThisBlogThis!Share to TwitterShare to FacebookShare to Pinterest
Labels: '80s television, 80s Movies, Computers, Eighties, Growing up in the 80s

Latin American cultures (which is my background) continue to celebrate the Christmas holiday season up until the day of Epiphany on January 6 (and some even after that). Epiphany in  Western Christianity celebrates the visit of the Magi (i.e. the three kings, or the three wise men) to Jesus just after his birth. (Whether this is historically accurate, I will leave for others to debate.)   It is also known, more popularly, as "Three Kings Day."

Well, as I am still celebrating the Christmas holidays, I thought I'd post an '80s-related video that connects with the holiday. The best I could do is this rockin' version of "We Three Kings" from '70s and '80s new wave group Blondie. (!!)  The song came out in 2009, and it's . . .  different.  I do love Blondie though. And Three Kings Day is here.  So enjoy!!


Since my Christmas tree is still up, let me add this: Daryl Hall and John Oates doing their version of "Jingle Bell Rock."  Its from 1983, so authentically '80s! And the video sure looks it. Love that '80s quirkiness!!  Enjoy!!

(Thanks to hallandoatesVEVO.)
Posted by Lazlo at 10:42 AM No comments: