For July 4th: When America Came Together

I wish all of my readers in the United States a great Independence Day.

In honor of July 4, I am re-posting a post which originally appeared May 21, 2016.  Its a post commemorating an event which brought Americans together, back when doing so seemed much more common than it does today. Hands Across America brought together Americans of very different politics, lifestyles, and viewpoints to call attention to the needs of the homeless. The event consisted of creating a human chain across the United States made up of people from all walks of life.

I post this today in commemoration of my country, the United States of America, and also to remind us that we can come together again as we once did in the past.

On May 25, 1986, a truly unique event occurred which I think has some lessons for us today.  In an effort to draw attention to the plight of the homeless, over 6 million people joined hands in a chain that crossed the United States from coast to coast.  The effort was called Hands Across America. 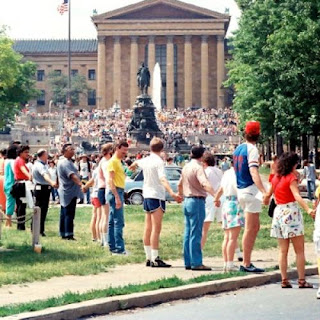 The event drew support from across the political spectrum, and included participation from many political, artistic and religious figures.  These included Yoko Ono, Oprah Winfrey, Robin Williams, Michael J. Fox, Michael Jackson, Dionne Warwick, Liza Minelli, Kenny Rogers, John Cardinal O'Connor, and the Reverend Robert Schuller, all of whom joined the human chain at some point along its lengthy route. 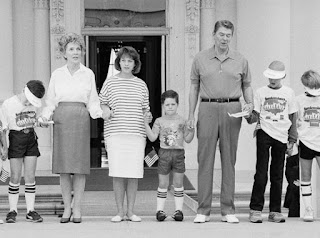 In Washington, D.C., the event included President Ronald Reagan at the White House, and House Speaker Tip O'Neill at the U.S. Capitol. 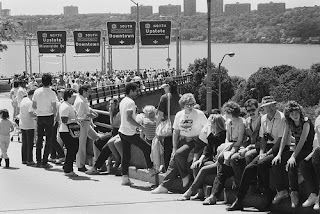 I think this wonderful event, which went on to raise $34 million for homeless charities, is an example for today.  Now that there is such division and mistrust in the U.S., we need a reminder that it doesn't always have to be like this.   As we approach the aniversary of Hands Across America, we could do well to look back and see that we came come together with hopefullness and idealism to do good, and to see the best in one another.