Here is a repost of a post which originally appeared in December 2013.

Cyndi Lauper was one of the iconic musical stars of the '80s, and representative of the colorful, freewheeling, and individualistic quality of '80s culture.

Lauper was artistic from an early age, attending a special school for the arts-inclined. Her music career largely began as part of the late '70s, early '80s new wave music group Blue Angel. But most of the music listening public first became aware of her with her first big hit "Girls Just Want to Have Fun."  The video, a fun loving expression of '80s quirkiness, featured both pro-wrestler "Captain" Lou Albano, and Cyndi's real-life mom, Catrine. The 1983 album which featured the song was accurately titled She's So Unusual.

As a young noncomformist, Lauper experimented with outrageous clothing styles. She also experienced rejection, such as when she had rocks thrown at her by un-accepting peers who treated her individuality with contempt. However, when she reached her massive popularity in the '80s, this quirky individuality and wild fashion became one of her trademarks.

Sensitivity was also one of Lauper's qualities, as expressed through both the song "Time After Time," and its video.

Lauper continued to express her quirkiness, individuality, and sensitivity in her next album, 1986's True Colors and the song of the same name.

In the years after her '80s fame, Lauper continued her creativity as a musician and performer, and continued to extoll individuality and tolerance. Recently, Lauper won rave reviews as the writer and composer of the musical Kinky Boots. 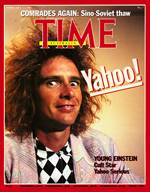 Anyone remember this guy? Yahoo Serious was an very '80s Australian comedian who is best known for his 1988 movie Young Einstein.

Young Einstein was a major hit in Australia, and when it was released in the U.S., it sold tickets and made money. But the reviews were more mixed, and some of the humor didn't quite translate.  Serious did develop a cult following in an era full of oddball comedians... and that hairstyle says '80s if nothing else does.

Actually, I never really saw Young Einstein, but essentially its about the idea that the namesake genius was actually an Aussie who invented the bubbles in beer and rock and roll.  Here's a clip.  Serious was part of an overall American interest in all things Aussie back in the '80s, following up on Men at Work, Air Supply, Midnight Oil and Crocodile Dundee.


Around the time of Mother's Day, I posted a remembrance of my mom's love of cop, private investigator, and action shows.  Now, for Father's Day, I have been trying to think of what my father liked when I was growing up. The first thing that came to mind was his interest in news programming and current events.


In particular, I am reminded of how back in the '70s he was a devout watcher of the CBS Evening News with Walter Cronkite.  I remember, like clockwork, my father would turn on that broadcast every night at 6:30 and follow it with great interest. Back in the '70s, during my pre-teen years, I had not yet developed much of an interest in the news, and found it all pretty boring, but I still remember how that news program started, with the teletype machine sounds in the background and the news program's logo announcing the show. Cronkite was famous for ending the show with "and thats the way it is."


I searched Youtube for something news related, and found this excellent 1975 broadcast of CBS news, in top form, with Cronkite reporting on the Apollo-Soyuz linkup in space that happened that year. This appealed to me because I actually remember this event being mentioned in school, and also because I have always been (and still am) a major fan of the space program.

My father was a no-nonsense type of guy, always very practical. He was a history teacher in high school, and always interested in politics and issues and news. He was also a major follower of "60 Minutes" and would watch that show just as consistently.  As I grew from a goofy kid to an oddball, nerdy teen, I also developed a strong interest in news and current events, and I have my Dad to partly thank for that. I owe him a lot, for which I can only partly show my appreciation as I spend time with him this weekend.
Posted by Lazlo at 1:07 AM No comments:

Email ThisBlogThis!Share to TwitterShare to FacebookShare to Pinterest
Labels: Growing up in the 80s, holidays, seventies 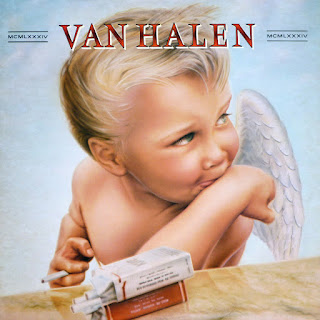 1984 was a great year for music. In searching the net for all things '80s, I discovered this podcast from Slate Magazine's Mike Pesca and Chris Molanphy who talked about the greatest songs of 1984.


They do a pretty good job of encapsulating 1984 in music, but here's a brief overview.

The very '80s rockers Van Halen were riding high in 1984 with their album, appropriately named "1984", and their biggest hit off that, "Jump."  How can anyone have gone through 1984 without remembering that memorable, and now classic, rock hit.

1984 was a great year for comebacks from classic musicians. Tina Turner, the soulful diva of the '60s and '70s, returned in a big way with "What's Love Got to Do with It," one of many hits off of her album Private Dancer.

The '70s progressive rock group Yes fine tuned its style for New Wave '80s, and had a major hit with "Owner of a Lonely Heart," off of the album 90125. The song was actually released the year before, but it was still pervading the airwaves in 1984 with its infectious and catchy style.

1984 was the year for Madonna's breakthrough hit "Like a Virgin," from the album of the same name.

And equally unforgettable, it was the year of Footloose, both the movie and the namesake song by Kenny Loggins.
Posted by Lazlo at 9:33 PM 2 comments: 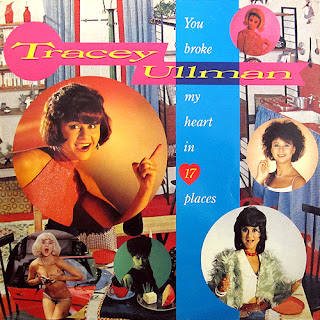 Here's another part of the '60s flashback which occurred during the 1980s.  In 1983 Tracey Ullman, a British musician and actress, put out an album You Broke My Heart in 17 Places, whose style clearly derived from the '60s.

The hit she had off of that album, "They Don't Know" is instantly recognizable as having the style of mid-'60s British female musicians such as Dusty Springfield and Petula Clark. As if to drive the point home, the video also clearly presents '60s era motifs, and features the very '60s Paul McCartney.
Posted by Lazlo at 11:00 AM No comments: 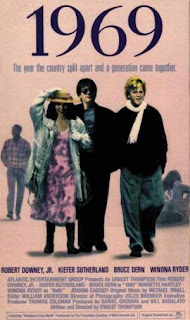 The 1980s was a time of great nostalgia for the 1960s. I think in some ways this was the result of aging baby boomers who were then largely in their thirties (as in the TV show Thirtysomething) and who provided a big audience for memories about their younger years.  There was also something cyclical about the phenomenon, since it was preceded during the '70s by Fifties nostalgia (i.e. Happy Days,  Grease, American Grafitti), and followed in the '90s by Seventies revivalism (i.e. That '70s Show, Dazed and Confused). In any case the '80s were full of flashbacks to the '60s which included television shows like The Wonder Years, movies like the self-explanatory 1969 (which came out in 1988), and plenty of musical revivals of '60s styles such as when Prince released his Sgt. Pepper-esque 1985 album Around the World in a Day.


The Moody Blues, a '60s era group that was still going strong in the '80s, had a hit with "Your Wildest Dreams," a song that dealt with longing for the era of change and protest. The video for that song is quite poignant.

As an '80s teen, I loved '80s music and culture. But I also shared a tremendous fascination for the era of the 1960s, a time which was so momentous that its effects rippled for many years afterward.  And '60s music was great. So, when there occurred this sudden interest in all things '60s, I dove right in, making myself tye-dye shirts, buying paisley prints, and listening obsessively to oldies stations that focused on sixties music.  There was an innocence and joy and idealism that shone forth from that era, and quite a few members of my own generation made it a point to revive that '60s culture and make it part of our own as well.

In 1986, in the midst of the revivalism, three of the four members of The Monkees decided to reunite and tour. They too had a hit with "That Was Then, This is Now."

Eventually, time turned, and '80s nostalgia eventually came our way in the form of '80s nights on the radio, and movies like The Wedding Singer (1998).  I think this '80s nostalgia is quite proper, as the '80s truly were a memorable decade. In the midst of such nostalgia, its important to remember how strong a component of '80s culture was this wave of revivalism that gave a second wind and a new generation of fans to '60s culture.