Here's a blogcast from Slate magazine featuring an interview with Jay Jay French of '80s metal glam band Twisted Sister. Joining him is director Andrew Horn to talk about the new Twisted Sister documentary.  In the course of the interview we get to hear about this hard working band that took a long time to finally achieve stardom.  Twisted Sister started as an andogynous glam-rock band back in the early '70s, amidst the era of Alice Cooper, Kiss and the New York Dolls. They kept their dreams held with a tight grip as they saw themselves ignored by record companies. Then came the Glam Metal era of the '80s, and they acheived their final breakthrough.  Its actually an inspiring story.

Here's what we remember Twisted Sister for, the representation of metal rebellion for many teen males who just wanted to rock.  This is a classic video.

And here the rebellion moved to school.

This song goes best with the interview. After listening to it, you become aware of what this song is about.
Posted by Lazlo at 10:32 PM No comments:

In continuing tribute to Prince, here are a few more Prince songs sung by other musicians. This is an example of his wide influence on music, especially in the '80s.

Chaka Kahn- "I Feel For You"

Morris Day and The Time-"Jungle Love" 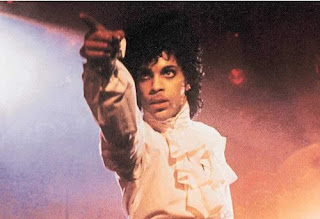 Prince, one of the most creative performers of the 1980s, and true musical legend, has passed away.  His passing at 57 years was unexpected and emotional.  For so many of us who grew up during the 1980s, Prince was a very strong presence on the musical culture of that era. I remember as I made my way through my teen years as an bit of an oddball, I found great inspiration in this fellow noncomformist whose signature at that time was his use of the color purple in attire.

Here's the trailer to the film Purple Rain (1984), which accompanied the album.

By the time the 1990s came along, he was a legend, having not only produced an enviable body of work (and continuing to do so until his passing) but also inspiring the work of so many others, including Sheila E., Appollonia, Morris Day and The Time, The Bangles, Sheena Easton and The Three O' Clock.


Here's Prince's "Nothing Compares 2 You" by Sinead O' Conner.   I dedicate it here to the enigmatic performer who has gone on to "punch a higher floor" but will never be forgotten.
Posted by Lazlo at 4:34 PM No comments: