Halloween with Kiss and Freddy

Found this Halloween treat on Youtube (thanks to architek777).  This goes all the way back to 1976.  Its Kiss, original members back in the original full makeup mode, appearing on Paul Lynde's Halloween Special.  Joining them is Margaret Hamilton, reprising her original Wizard of Oz role as the Wicked Witch of the West, and the character of Witchiepoo from the '70s show H.R. Puffnstuff.

For another trick or treat, following is a re-post of a post of mine from 2012. 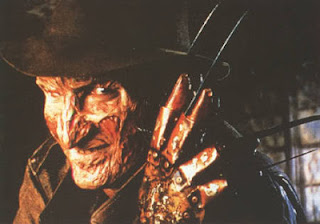 Halloween is approaching, and thoughts turn to things scary and spooky. . . and horror.

Those of us who grew up in the 1980s and were into horror movies remember Freddy Krueger. The ghoulish star of the horror flick Nightmare on Elm Street (1984), Freddy followed in the wake of slasher era flicks like Friday the 13th (1980) and Halloween (1978).  During the late ‘70s and the ‘80s, these three movies produced numerous sequels which thrived among horror loving young people.

I first became acquainted with Freddy at an informal video-watching party among several members of my high school drama club, of which I was a member. We clustered together around a couch, munching on popcorn, and watching the first Nightmare on Elm Street.  I always thought that, behind the blood and gore aspects of the Freddy movies, there was actually some psychological insight into all those dark thoughts and fears that young people live with.

Freddy represented the dark and scary stuff that lurked in all of our nightmares.  Things that bother us. Things we run away from.  The kind of stuff that we all are relieved to know doesn’t follow us into our waking lives. . . but in all of the Nightmare on Elm Street movies, they did.
Posted by Lazlo at 11:56 PM No comments: