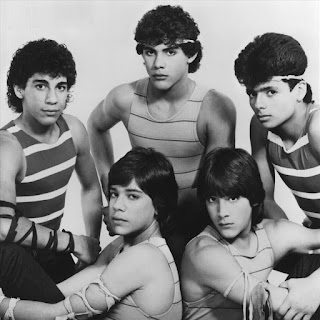 OK, brace yourselves, were gonna venture into high campy '80s with this post.

Back in the '80s, before the Backstreet Boys, before One Direction, before the plethora of boy bands that hit the charts in the late '90s, and even before that late '80s phenomenon known as New Kids On The Block, there was . . .  Menudo.  Menudo was a Puerto Rican singing group put together in 1977 by their producer Edgardo Diaz, especially made to take Latin America by storm. The members were all teen boys and could only be under a certain age, with members being replaced once the age limit was reached. Success came quickly in the early 1980s, and the group's intense popularity spread accross Latin America, where their arrival often sparked a feverish reaction from the group's primarily teen female fans.  The phenomenon was such that it was compared to Beatlemania, and dubbed Menudomania, although it can be said that the latter group's mania had more to do with commercial success than with musical exceptionalism.

Although Menudo's popularity sweeped accross Latin America, it took longer to penetrate the English speaking market, and its success there was more limited. One short lived example of the group's presence in the United States was Menudo On ABC, brief 4-minute segments which appeared on that network's 1983 Saturday morning TV schedule.  Above is one such segment, with the group visiting the historic section of San Juan, Puerto Rico.

They subsequently released an English language album, appeared on shows like Silver Spoons, did commercial appearances and even had a song featured on the soundtrack of the movie "Cannonball Run 2."  However, 1983-1984 appeared to be the peak of the moment in fame in the U.S.. They never scored a hit on American radio,  and soon faded from view as their novelty wore off.

Here's one last clip, if you can stand it . . . their performances are, admittedly, a unique taste.  This one is full frontal Menudo here, in all their campy glory. Its from the 1984 MDA telethon, with Tony Orlando introducing the group, and a brief glimpse of Menudomania American style.  You've been warned, click if you feel up to it.
Posted by Lazlo at 5:41 PM 2 comments: