Dave Late Night in the 80s 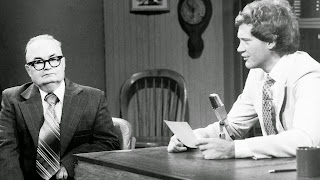 David Letterman, the host who revolutionized late night talk shows back in the '80s, retired this past week. For a long time, he has been a fairly mainstream celebrity, that it is often hard to remember how truly novel his comedy was during the '80s. During that decade (more specifically between 1980 and 1993) Letterman was the host, on NBC, of Late Night with David Letterman.  His show during that era was a free wheeling, loosely structured, oddball affair, full of the quirky and sometimes strange humor that seemed to pervade the decade.

I mean, speaking from personal experience, back then I often found myself laughing uproariously at the off the wall humor that came at you from odd angles and which seemed to be everywhere: in comics like Bloom County and The Far Side, in stand up comedians like Stephen Wright and Gallagher (and you should have seen the early stand up Whoopi Goldberg), and in shows like Eddie Murphy/Joe Piscopo era Saturday Night Live.  There was a viewpoint that was just fresh, so quirky and so very funny, that has not been seen for quite a bit. (In the '90s, quite frankly, comedy seemed to take on a more hard edged quality, more "in your face" and less oddball, which was quite different.)

David Letterman's Late Night show was a prime example of the off the wall '80s humor, as exemplified by his experimentation with suits made out of different materials. Here's several clips over the years.